I touch on street food in Lima here, but they didn’t have that much there so this is primarily food found in Cusco and the Sacred Valley. Street food in Cusco and the Sacred Valley is delicious, but varies greatly in price and quality (and quality is often not dictated by price). You can go to two vendors that seem nearly identical and get something nearly inedible from one and delicious from the other. Prices are very reasonable, making it easy to eat your way across the city, trying a little bit of everything, and I highly recommend that you do.

We love to try everything, but since the water is not safe to drink in Peru, we tried to be a little extra cautious to keep from getting sick, while still enjoying the food. Many people will advise you to only eat in tourist restaurants, but this is not our style. We stuck primarily to hot foods and fruits with skin. Before the trip, we got the oral Typhoid vaccine and made sure we were up to date on all of our routine shots. Maybe we lucked out, but we never got sick.

See Peru - Restaurant Food for specific restaurants that we tried and a bit about the cuisine.

Our hotel in Cusco had a fruit basket every morning with lots of safe and tasty fruits, but we also went to the San Pedro Market to seek out some special fruits that we had to try. Some interesting ones:

All of our breakfasts were provided by our hotels. They generally consisted of eggs, bread with jam, a hot drink and fruit. Sometimes there was cereal, yogurt, or other choices. The cereals were usually sweetened. In the morning the restaurants offered similar fare for about 10 soles or in Cusco street vendors sold rice and veggies with an egg or chicken for about 5 soles. 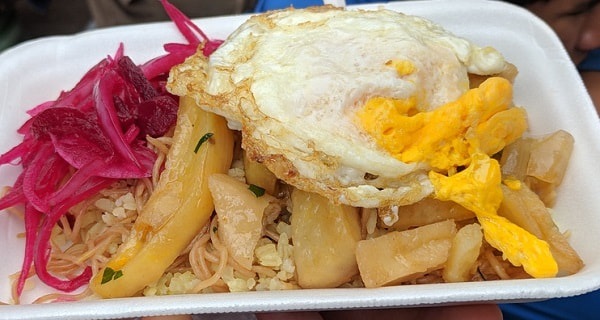 Or the melting pot of Hong Kong Food