Mix a little culture, lots of stairs, stunning views, and a whole barrel of monkeys together and you get Tiger Cave Temple (Wat Tham Sua). We got here expecting a long walk up some stairs for a cool view, but came away with a bit of an adventure! This place far surpassed our expectations.

Tiger temple is free to visit and open to tourists; however, this is a place of worship so please be respectful. You will be required to dress appropriately (more on that under what to bring) and take your shoes off in some areas.

Going Up - This is climbing stairs, not a hike, but there are lots of them. 1237 according to the signs. They vary in size from mini to giant and are uneven in places, but solid and have a railing. Most of the trail has tree cover.

Wildlife - I don’t know if they are always there, but when we visited there were no monkeys at the top or the bottom, but plenty in the middle. Most of them were just napping or wandering around scavenging for food but a couple were snatching bags and anything they could get.

Facilities - At the bottom there is a mostly gravel parking lot, a couple temples, some vendors selling food and trinkets, and restrooms.

People - Most of the people we saw in the temples on the ground were locals, but most of the people on the stairs were tourists. We went in the mid-morning and there weren’t a lot of people. There were signs by the gate saying that it is illegal to give things to beggars so I assume they have problems occasionally. We have heard of monks asking for offerings (some real monks and some fake ones) so if you are approached by one use your judgment.

Time - We spent about 1.5 hours there. We could have spent a lot more time looking around.

Respectful Clothing - For women that means a top that covers your shoulders and elbows and long pants. For men a t-shirt is fine as long as your shoulders are covered and knee length shorts are acceptable. A bit unfair and very hot for the women, but that is the way it is, and at least you don’t have to cover your head. I wore a tank top and shorts but brought a loose fitting athletic shirt with three quarter length sleeves and linen beach pants (like these) that slip on easily when I need them. Some women bring the tie on wrap around skirts or wear shawls over their arms and shoulders. The vendors may have something to purchase or rent, but don’t count on it. The clothing rules weren’t strongly enforced here, but it is the right thing to do, and how would you feel if you got most of the way up and were told to leave for breaking the rules?

Water - Make sure to bring some, but keep ahold of it or put it in a small pack so the monkeys don’t snag it. There is usually free water at the top (very common in temples) that is supposed to be safe to drink, although we didn’t try any. This one is collapsible and is my favorite travel bottle: Platypus DuoLock 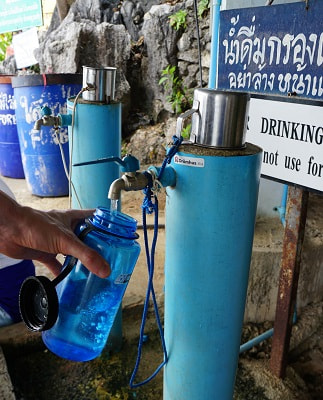 Snacks - At your own risk. The monkeys like snacks too so you may be better off leaving your snacks behind for this one. If you do bring some make sure they are in a pack, not a plastic bag because the monkeys know to tear them open.

Camera - Don’t forget something to take pictures with.

It really isn’t near much else and there isn’t much public transit available in the area so you will need some form of transportation to get here.

Car/Tuk Tuk - You could hire a driver to take you here and some will even wait while you visit. This spot is kind of on the way to the airport depending on where you are staying so that may be an option for some people, but make sure your luggage is safe.

Scooter/Motorbike/Motorcycle - We rented a scooter for the week and rode here from Ao Nang. The roads were fine and it was a nice ride. As we got close we could see a slight shimmer from the sun reflecting off the Buddha at the top of the mountain.

Bicycle - Depending on where you are staying this could be a good bike ride. You will have to contend with regular car and motorbike traffic, but the speed limits are relatively low. 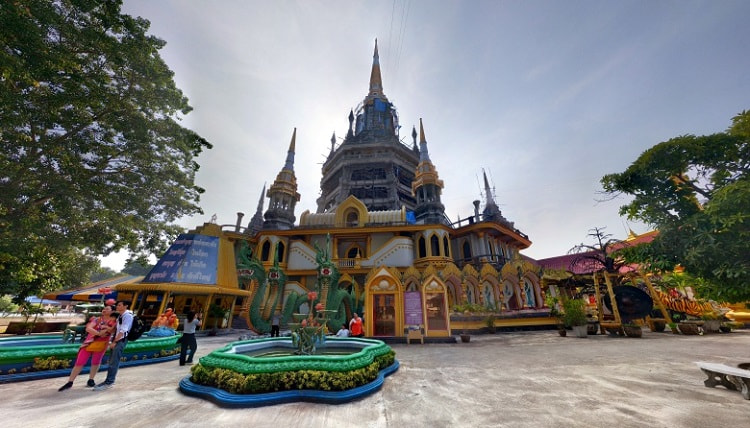 First we wandered around the grounds a little. This temple is more like a complex with a whole collection of temples, shrines, and shops. If you have lots of time you could probably spend an hour just walking around. You can take a virtual stroll around with Google Street View. We made a quick loop, then slipped our shoes off to visit the Tiger Cave.

In the Tiger Cave Temple there were monks surrounded by worshipers with boxes of food that they were presenting as offerings. The hall was built into the mountain, but was large and airy, heavily laden with gold adornment, and sprinkled with incense and flowers. The soft sound of chanting and quiet prayer echoed around the hall. We were glad that we didn’t have our shoes on so we could move fairly unobtrusively across the hall to the entrance of the cave.

The cave had a few stairs and they were a little slippery in our sock feet. I’m not sure what we expected, perhaps a majestic bust, a tiger hide, or a bronze tiger like we would expect in Western culture, but this is not the West. When we came around the corner to see this guy looking at us we were a bit surprised. There was a more stoic shrine behind a gate, but it didn’t seem to be the focus point. A large plaque has an explanation of the site and says that this was once the home of a real tiger, but that tiger is long gone. 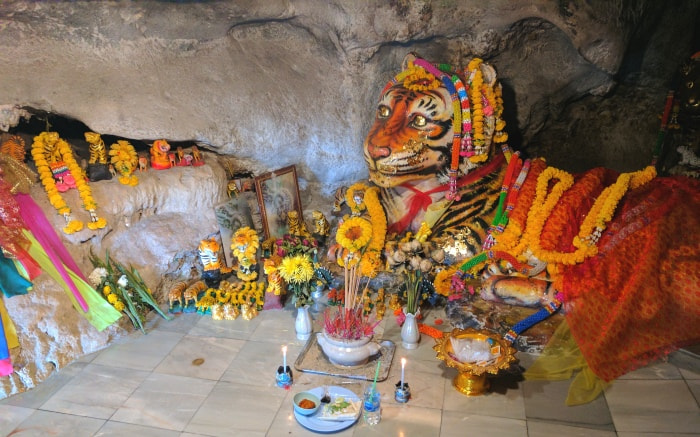 The bright colors in these temples and the shimmering lights that sometimes surround Buddha icons were good reminders of how different Eastern religion and culture can be. To our unfamiliar eyes it looked gaudy and excessive, but I imagine many Western churches look dark and forboding or just plain and boring to outsiders.

Climbing to the Buddha 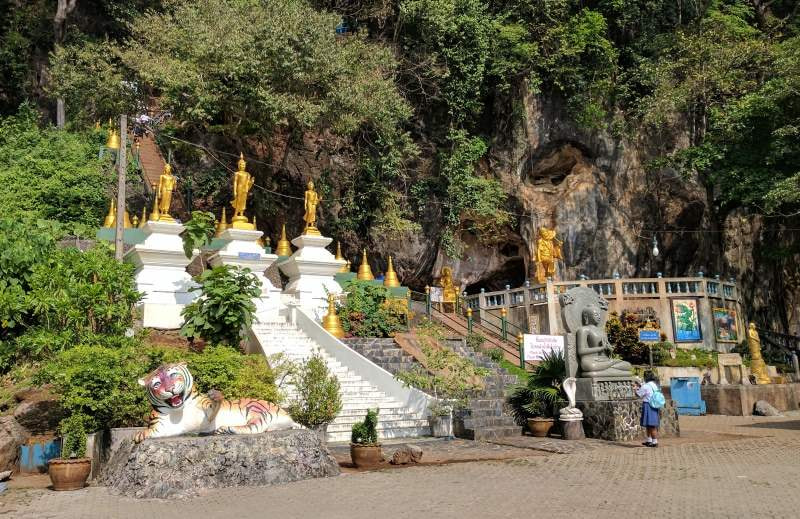 The start of the stairs is pretty easy to find. They start out nice and gentle, but get steep in a hurry. It almost felt like the stair maker was toying with us, making one set normal, then one miniature, and the next giant, so as soon as you get into a rhythm they change it up on you. The really cool thing about the stairs is that they are numbered. At every landing there is a post with the number on it so you know exactly how far you have come. 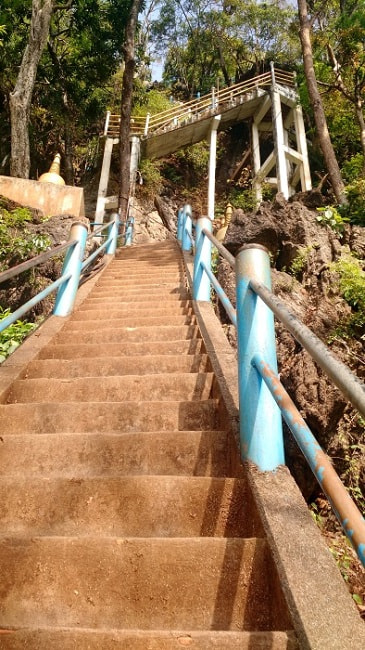 A little way up we saw a monkey in a tree and got all excited. Little did we know what was coming. A couple flights of stairs late we saw more closer to the stairs, and before we knew it they were everywhere. We watched some use their dextrous feet to open water bottles. They would carefully pour the water and lap it up as it flowed out, almost like a drinking fountain. They had scored some snacks from the group ahead of us and skillfully peeled away the wrappers from some crackers with practiced efficiency. It is kind of sad to think that most of them probably subsist on a diet of junk food.

As we were walking by one it grabbed onto my husband’s bag. It couldn’t have been more than a second or two, but as it hung there I held my breath hoping it would go down to the ground and not up onto his head. It swung there for a second before letting go. This was our only encounter like that, although it had us on guard and perhaps the monkeys sensed that.

Most of the monkeys were much less energetic and mischievous. A couple youngsters slid down the banisters, but most of the monkeys just lounged around on the side of the trail grooming or napping. Many acted as if we weren’t even there. At one landing there was a group napping in the middle of the steps and people were stepping over them. This made me glad I was wearing pants, but I was still too scared to attempt it after our previous encounter and waited for one to move. As we neared the top the monkeys thinned out, then disappeared completely. 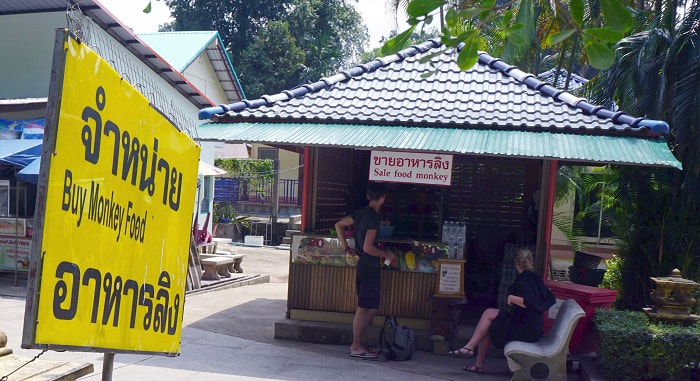 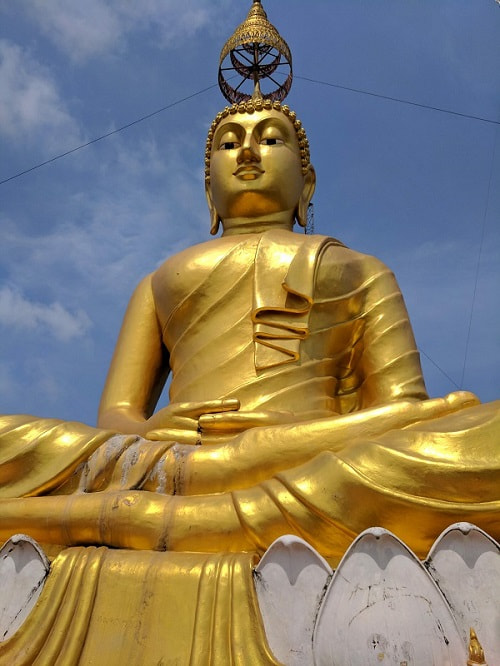 Finally at the top we stopped in the shade to remove our shoes and have a quick snack, before checking out the shrine and viewing platform. We pulled out the bag of peanuts that we had smuggled past the monkeys and opened it to find that it was full of ants. Not just one or two, but a mini ant colony of over a hundred. It wasn’t like that when we got it so all we could figure was that they were either in our room or had crawled into the scooter compartment at one of our stops. We promptly tossed them in the bin. We felt bad that we couldn’t give them to the monkeys, but didn’t want any more incidents. 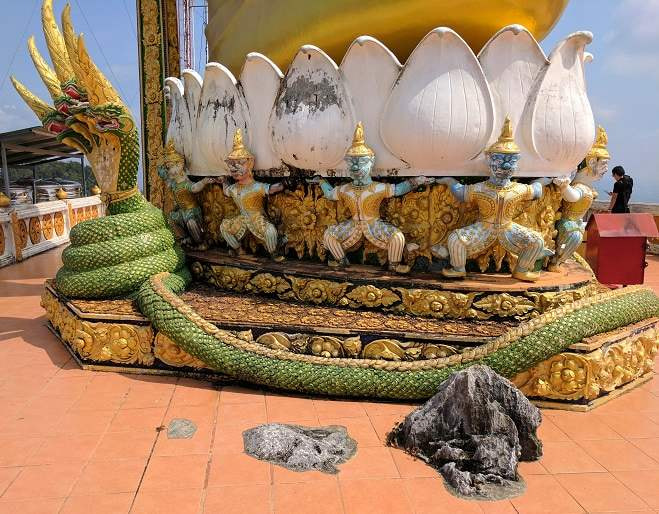 We slipped out of our shoes and completed the last few steps to the top. The top had a really interesting combination of architecture, nature, and religious icons. Most of the platform was manicured, but here and there they let the natural mountain sneak through. These bits were rugged and unpolished, in stark contrast with the shimmering gold Buddha. Behind it all some pesky antennas also stuck out of the mountain. I suppose if you build all those stairs to get to the top of one of these hard-to-reach mountain tops it makes sense to use it for something practical, but it was an odd element here. 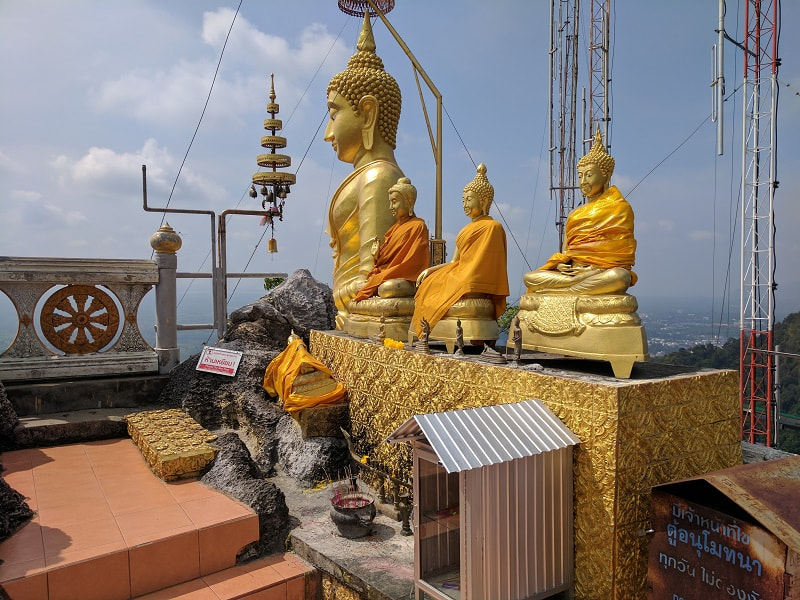 The giant golden Buddha was a formidable centerpiece. Looking up at the enormous shimmering Buddha you can’t help but feel small and humble. A light wind swirled around the platform and added added a bit to the magic of the spot. There were a number of shrines and smaller Buddhas around the platform.

After the climb up shrouded in trees this is the first clear view you get of the surroundings and it is incredible. You can see the land in every direction. It is odd to see how flat it is with random limestone mountains sprouting from the landscape. We enjoyed the refreshing breeze for a bit, then headed back down to run the monkey gauntlet again.

Or come on another adventure in Hong Kong at Suicide Cliff