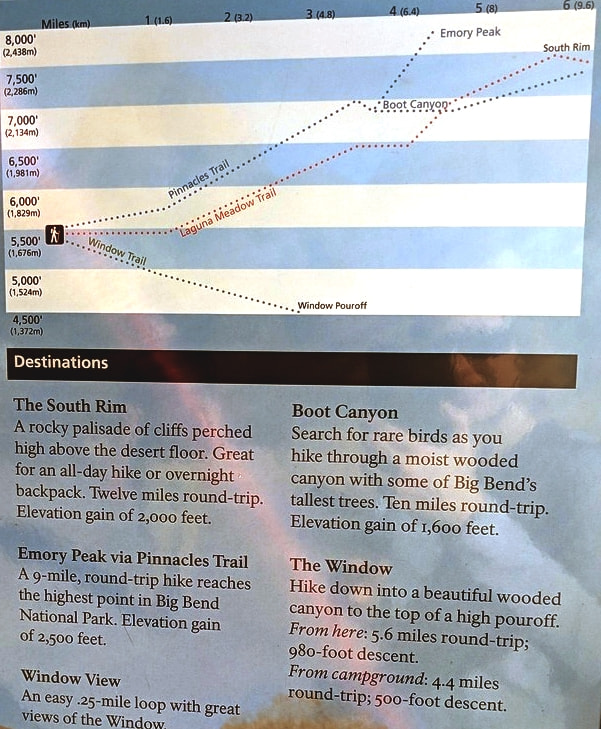 We picked one of the most strenuous day hikes. We took the Pinnacles Trail to Emory Peak, to Boot Canyon, to South Rim, to Laguna Meadow. 14.8 miles not including detours with lots of up and down. This was a tiring but awesome day. We are in our early 30s and active. March 2018, on a Friday, we left at 9:30, got to Emory at 12, South Rim at 2:15, and back to the parking lot at 5. 2L of water each was fine, at least in early March. There was some tree/cliff cover on Pinnacles and Laguna but you are mostly exposed on the rest of the trails. There are a couple pit toilets on the trail that are functional but pretty gross and you need to bring toilet paper. You can start any of the hikes from the main parking lot at the Chisos Lodge Visitor Center Area. The visitor center area has bathrooms, a water bottle filler, a restaurant, a shop, some exhibits, and rangers on staff to answer questions. 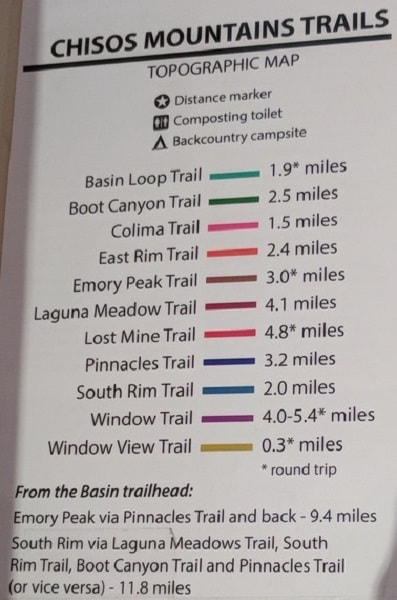 In March the East Rim Trail was closed for peregrine falcon nesting. 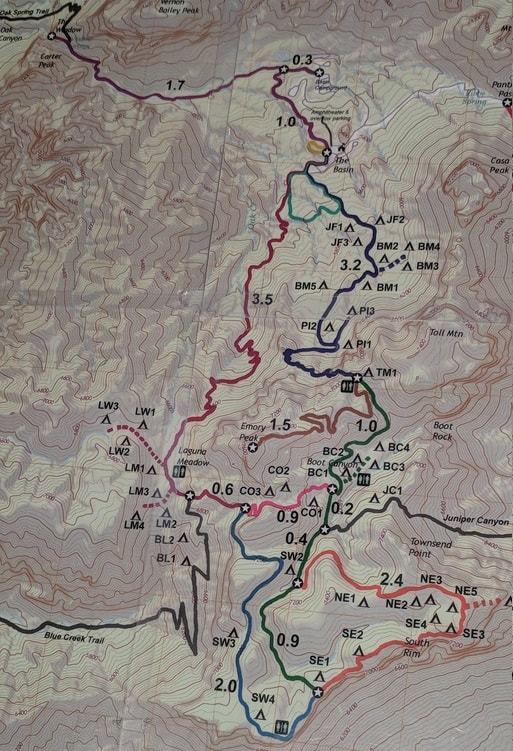 Which Trail is For You?

We went up through the Pinnacles Trail (moderately steep but pretty) and back via Laguna Meadows Trail (less steep but still a lot of elevation changes and definitely not a meadow).

For us this hike was a lot of fun, but many people didn’t make the final climb to the top of Emory Peak due to the rock climbing involved. I would say it was more than the “rock scramble” advertized (see images below, Emory Peak Trail). I didn’t feel it was particularly difficult or dangerous, but if you have a fear of hights the South Rim may be the better option. The view from the summit of Emory is incredible, and the drop is extreme on all sides.

The view from the South Rim is very dramatic and there is a great lookout you can walk out on. We were definitely more alone on the the South Rim trail. I think that South Rim and Emory are different but equally beautiful, but Emory is more interesting to get to, if you are don’t have a problem with heights. But if you don’t want to pick, just do both!

At the gate we realized that we forgot our map and asked the ranger for another. He jokingly said he would exchange it for one Krispy Cream doughnut and lamented the fact that the closest one was hours away in El Paso.

We drove into the Chisos Basin area for our major hike of the trip. The road into the basin is a beautiful drive, but be prepared lots of sharp turns and a steep grade. The basin is the area that to me really felt like you are entering a national park. It has the feel of entering a park like Yosemite, where there is a power and a grand scale to everything.

We stopped at the ranger station in the visitor center for some pointers on our options. We were considering the South Rim (most dramatic view in the park) or Emory Peak (highest point in the park). The ranger pointed out what trails we could take and reviewed bear and mountain lion etiquette with us. They stressed that there weren’t many, but that both lived in the area we were hiking through and there had been recent sightings. 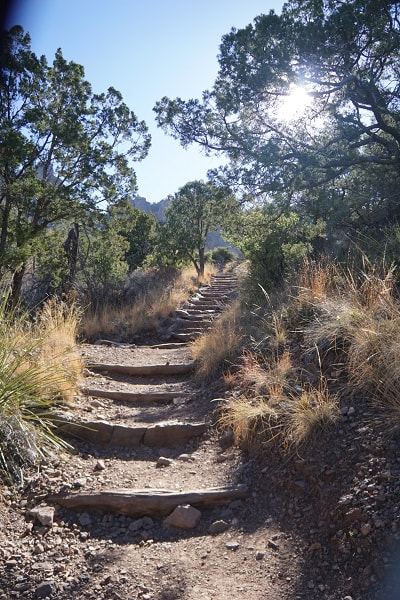 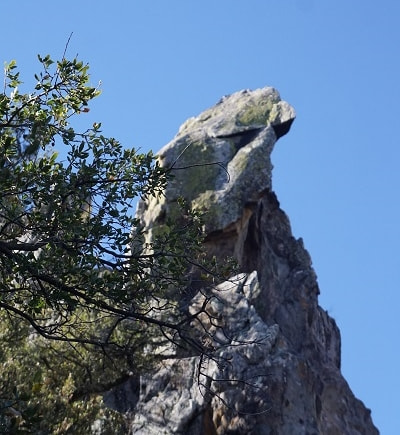 We started up the pinnacles section of the trail and made good time uphill to the first junction, where we had to decide which hike we were going to do, and decided to go for Emory Peak. There was a middle-aged man that we kept swapping places with every time one of us would stop for a break and we walked with him a little bit and talked about the park. He had done this same hike 25 years ago and was recalling it as he went, like rereading an old book. 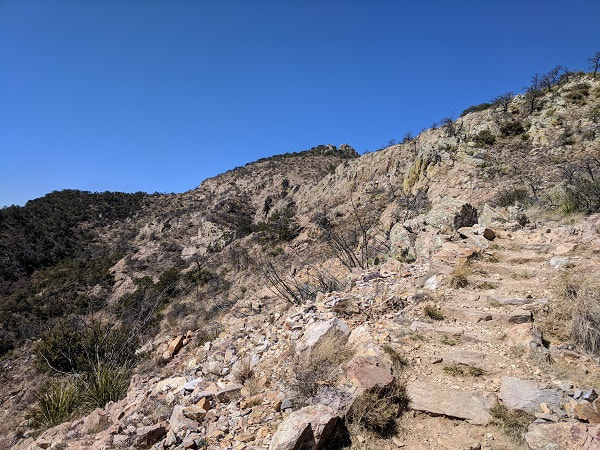 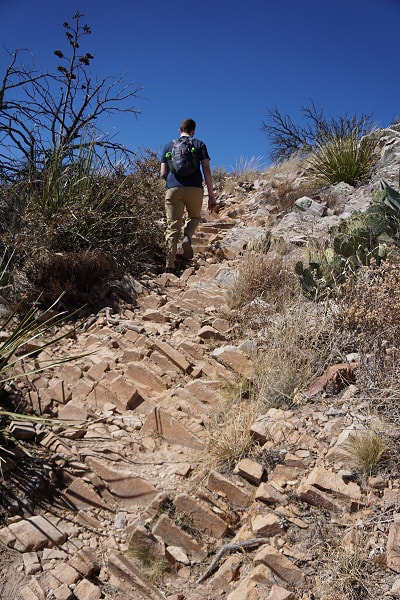 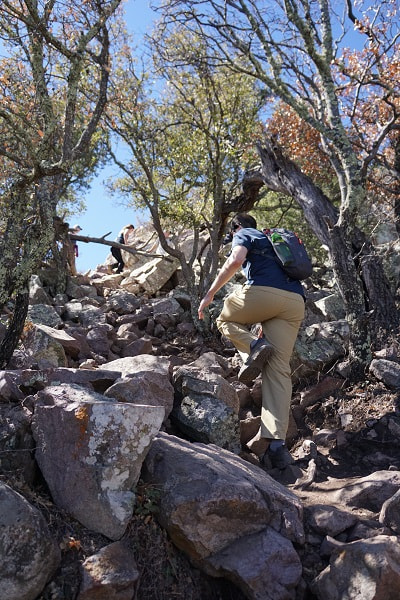 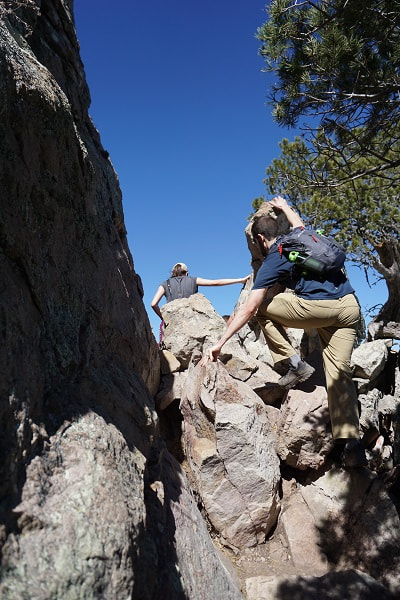 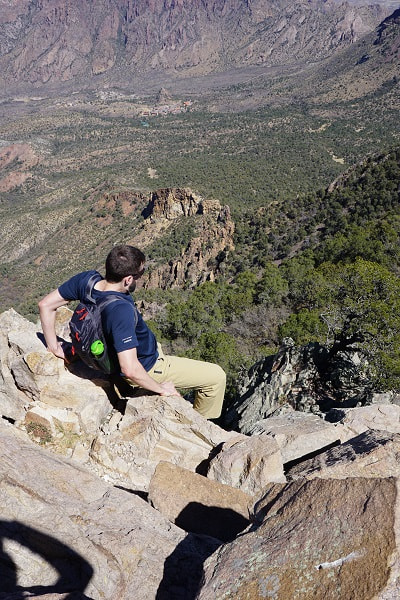 We made it to the final assent, which was advertised as a rock scramble, but by our definition, and others, was more like rock climbing, which I love. There were a few spots where you had to shimmy up between rocks and others where you had to find handhold to climb up a rock face.

We and another couple where the only ones at the top. The top very small so it was good that there were only a couple of us. This could be very uncomfortable and dangerous with a crowd. The drop on all sides was enough to make me nervous to stand anywhere near the edge. However, it was the oddest mountaintop I have ever experienced. The air was totally still, not even a whisper of a breeze. The dessert winds were weird, but with something like this, I would at least expect some kind of air current to be moving up the mountain. We exchanged camera with the other couple to take pictures and noticed we both had the same camera. I setup to take their picture but could only fit their heads in the shot since they had only brought a telephoto lens. As I tried to decide how close to the edge I could safely go, Dan suggested we just swap lenses for a minute! We did and it worked perfectly. It is incredible that of all the people and all the cameras that we both had Sony’s.

On the way down we crossed paths with the only other hiker we had seen in Devil’s Den on the previous day. We got to the fork to start our hike back. At this point we had a dilemma. It was still early and we were feeling really good, so we considered doing the South Rim as well. Per the map, it only added 2.5 miles and not much elevation change, but it is generally suggested to do as an overnight hike and we didn’t want to get ourselves in a bad situation. Was it just the literature being cautious? As we were trying to decide some older hikers came from that direction so we asked their opinion and how long they had been on the trail. They said it was very definitely worth it, fairly easy, and they had only been hiking a few hours so we went for it! 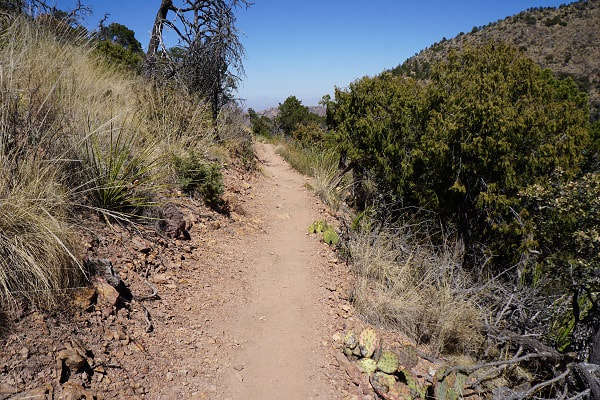 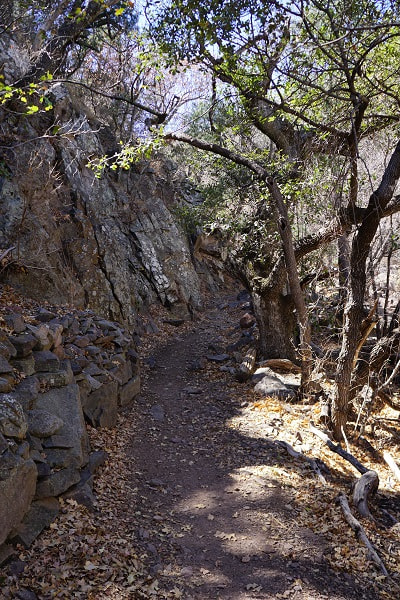 On the way to the South Rim we passed a group of backpackers in the “water hole” in Boot Canyon happily filtering mucky looking greenish brown water from a tiny pool in the rocks. 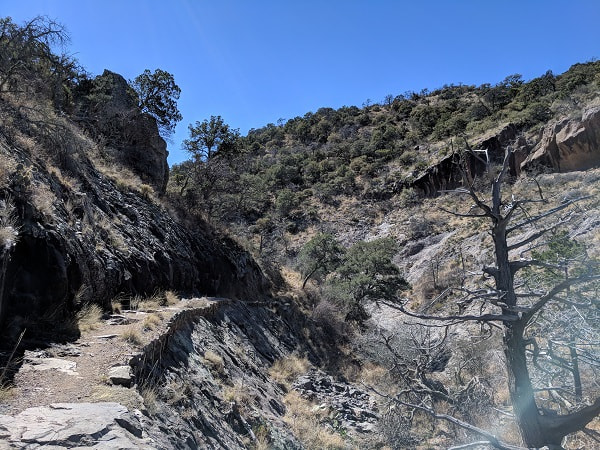 The South Rim was very dramatic. You are walking along a fairly non-descript area of grass and scrub brush when it just stop and drops straight down 2,500 feet into a vast dessert that looks like something from another planet. It is almost completely barren. I can’t imagine being the first person to be walking along an stumble across this. 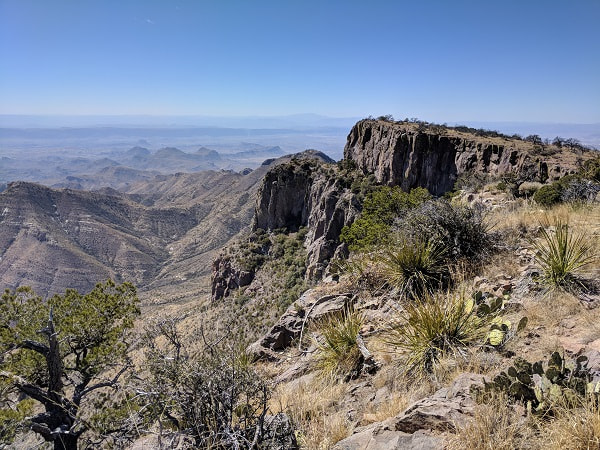 We were very glad we did it, but the trudge back was long and boring. It was easy to just zone out and plod along, but as there were much fewer people around, we had to stay alert for lions and bears. 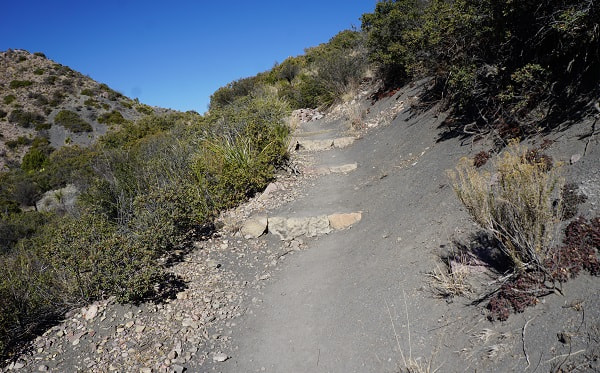 Once we caught up with and passed some of the people from the Emory Peak Trail we felt much better about the wildlife threat and our timing. We made it back to the car with aching feet, but otherwise feeling pretty good and with a couple hours of daylight to spare.

We decided to try some Texas BBQ, at the one BBQ place in the tiny town, but first get shower to spare the other diners. We shared a banana on the way back, but its peal didn’t seem to be a fan of the desert. I tossed it out the window and it came right back though the rear window and stuck there (probably karma for tossing it in the first place). Back at our B&B we got lovely showers and clean clothes. As I was getting my shoes on my sunglasses toppled down onto the gravel but were saved by a soft landing. This soft landing was my husband’s hiking socks from the 35k steps and over 15 miles of hiking that day… Once we were clean we looked up directions to the BBQ place and found that it and many other places in town closed at 6PM! Aren’t people in the park during the day? What is the point of all these places that only offer lunch and early dinner? We were perplexed but settled for a Mexican place, got a pretty good meal, and collapsed for the night, grateful to have encountered so little wildlife.

Check out Day Trip Essentials for a full packing list.

Water - You want plenty of water on this one!

Sunscreen - The sun out there was strong and we got a bit burnt even with sunscreen and hats.

Experience the flowers in Southern California