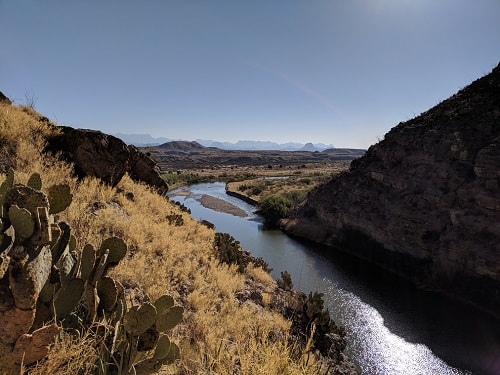 Dramatic but tranquil, very rewarding for an easy hike. Santa Elena Canyon was gorgeous. From the lookout you could see an abrupt stone wall stretching into the distance in both direction. It was a severe transition from rolling desert to a solid wall of stone that only parted for the canyon. In my opinion this is the prettiest of the canyons.

We got here around 9AM in March 2018, on a Saturday. The lighting was great and we were the only ones in the canyon until we were on our way out. The trail is about a mile round trip and takes about an hour if you take it slow and enjoy it. 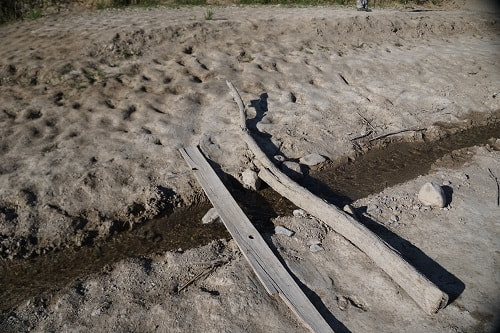 There is a “bridge” across a tiny stream, then a short climb (a paved path with railings along most of it) up and down to get into the canyon, then it levels out to a nice sandy trail. 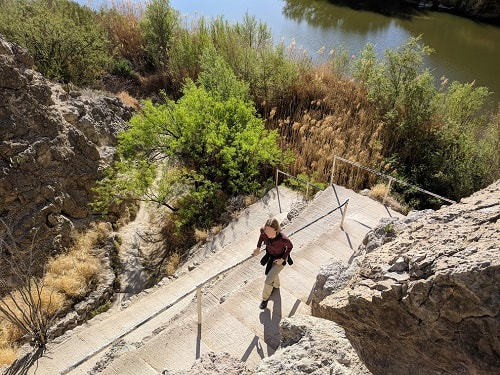 The trail was mostly shaded and there was a lovely breeze when we were there. The birds were singing and reeds taller than us were swaying in the wind. Very peaceful. In my opinion this is the prettiest of the canyons.

We got up early and headed for Santa Elena Canyon and the scenic drive. The scenic drive can be a down and back drive or a loop, but part of the loop is a gravel road and conditions vary. We asked at the entrance which route was suitable and Ranger Krispy Crème was there. He looked out at our rental and said strike 1 – no 4-wheel drive, strike 2 – no 4 ply tires, and strike 3 – not enough ground clearance, you’re out! So down and back it was. Since we’d have to come back that way anyways, we went straight down without stopping on the way to the canyon to get the best morning lighting.

Santa Elena Canyon was gorgeous. From the lookout you could see an abrupt stone wall stretching into the distance in both directions. It was a severe transition from rolling desert to a solid wall of stone that only parted for the canyon. I thought we were late getting started, but at 9:15 we were the only people at the lookout and there was only one group in the canyon, who were leaving, so we had the entire place to ourselves. We met the group at the mouth of the canyon and they took our picture for us and excitedly pointed out a turtle underwater eating a dead fish. 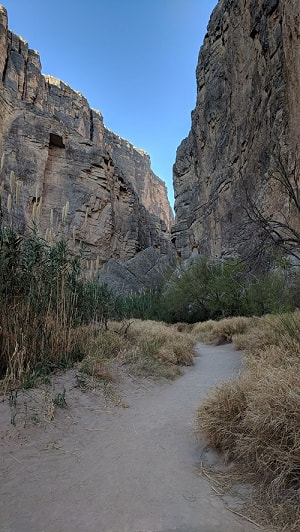 Santa Elena Canyon was very serene. You could barely detect the motion of the water and other than an occasional birdcall and the slight breeze it was silent. There were reeds growing twice my height and they swayed slightly in the breeze. The tall walls shaded everything from the harsh dessert sun. The sun created a magical glow at the top of the canyon. We wandered along the sandy trail that weaved around house size boulders and enjoyed the solitude. As we were leaving, around 10, we heard the gleeful hooting echoing off the canyon walls of people starting to arrive.