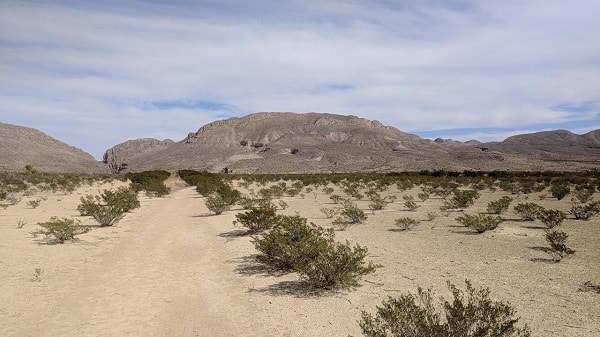 We got here around 3 PM in March 2018, on a Thursday, and there were only two other vehicles at the trail head (roadside pull of near Persimmon’s Gap Visitor Center). Do yourself a favor and stop at the ranger’s station for tips and a map if you intend to do Devil’s Den.

The trail starts out on a well marked flat desert path until you hit the wash, about 1.5 miles in. At the wash you can either follow the wash left to Dog Canyon or right to Devil’s Den. The Dog Canyon Trail goes through the canyon and the trail is easier to follow. The Devil’s Den Trail follows the wash partway to the canyon, but the path climbs out of the wash and up onto the ridge before you get to the canyon, then follows the canyon from above. The trail is fairly easy and mostly flat, but can be brutal in the hot sun. You can hike though the canyon but it was very overgrown when we were there. Round trip from the road to Devil’s Den is supposed to be about 5.5 miles but it depends how far you go. We went all the way to the end of the canyon and it was closer to 6.5 miles but we went the wrong way.

This trail doesn’t have the wow factor of some of the other trails but is still pretty cool. Devil’s Den kind of sneaks up on you. When you are walking across the desert is is just a scraggly crack in the distance, you can’t see it at all from the wash, then suddenly it is there. Just like it suddenly appears on the other end it suddenly ends as well. I would suggest doing this one at the beginning of a visit, not the end, since I feel you may be over saturated with the rest of the park’s wonders to really appreciate it at the end.

We did this hike to break up our trip and stretch our legs after the long drive from San Antonio. This trail was not terribly well marked and the hike took longer than we expected, about 3 hours.

We set off into the desert towards the canyons. It was relatively cool out, but everything around us looked crispy, as if a single spark could easily ignite it. This was our first experience with the winds in this park. They seem to come out of nowhere, hit you in a gust, and disappear. I have never worn a sun hat before and I had some learning to do keep it on my head when the winds were so unpredictable. It was very bizarre how one moment there wouldn’t even be a whisper of a breeze, then the next moment a gust would cause the chin strap on my hat to try to strangle me as my hat took flight. 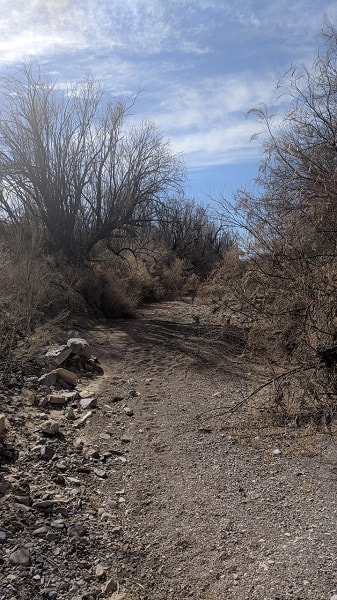 We climbed down from the desert flats into a dry sandy riverbed and took the fork for Devil’s Den Canyon. From here the canyon appeared to be just a jagged line in the rock. We walked down the riverbed until we spotted some rock markers on the side signaling us to climb up and out, just as the ranger said. But once we were out the trail disappeared. We checked back in the riverbed, but the footprints definitely stopped at the markers. We followed footprints across the desert for a little bit until we lost them as well. Wondering if the stone markers were just someone’s idea of a joke we continued on using the landmarks to find the opening of the canyon. 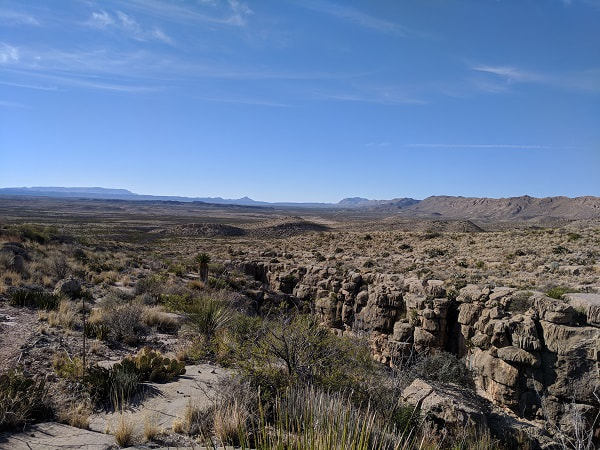 Once in the canyon it was very slow going. The canyon was full of debris and it seemed that every plant we encountered had thorns. We were a bit nervous about snakes as we climbed around all the rocks as well. We got many scrapes and snags and finally got to a place that was so overgrown that we couldn’t get through without the guarantee of more bloodshed and damage to our gear. We pulled out the map that the ranger gave us. Sure enough, we had gone the wrong way and we were supposed to be on the rim of the canyon, not in the canyon. There was a canyon trail, but only recommended from the top end of the canyon and only for a “true adventure.”

Back down the canyon we went and scrambled up to the rim. On the rim there was a fairly well marked trail that was an easy walk with much less aggressive vegetation. Not quite as exciting but much more easygoing, with great views over the rim. We only saw one other person on this trail and had the place completely to ourselves. The canyon abruptly ended in a basin, which must have been a lake in another life. 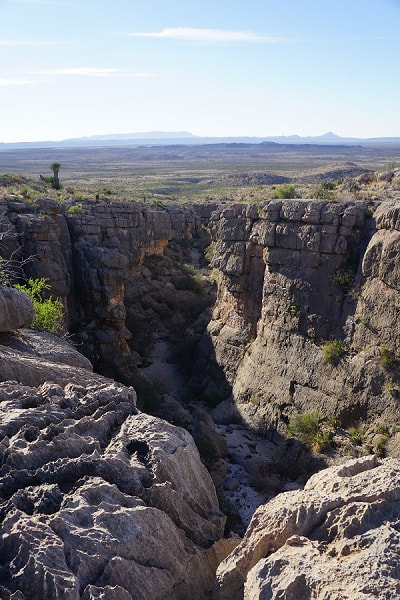 We headed back to the car, along the proper path this time. We found the place where we (and many others, as evident by the footprints) had missed the markers. There is some brush in the middle of the wash and it is hard to see if you are on the wrong side, so we won that coin toss. It was less than an hour from sunset by the time that we made it back to the car and we are pretty sure we saw a ranger checking on us from the road. 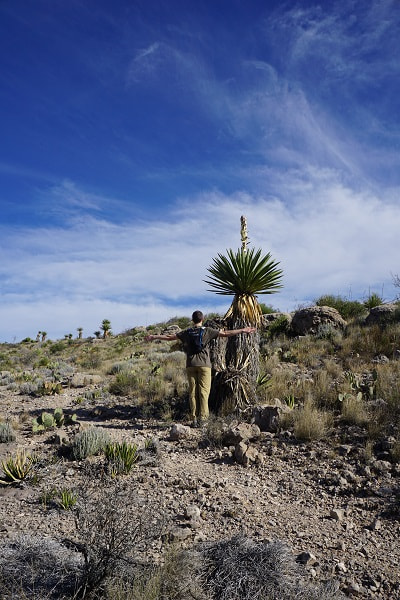 Heading out of the park, towards the tiny town and our B&B, the sunset painted the mountains in constantly shifting light. Just as the sun was fading a full moon rose into view. The moon was surreal in the dessert but a little disappointing as well, since the area is so well known for stars, but the moon obscures many of them.