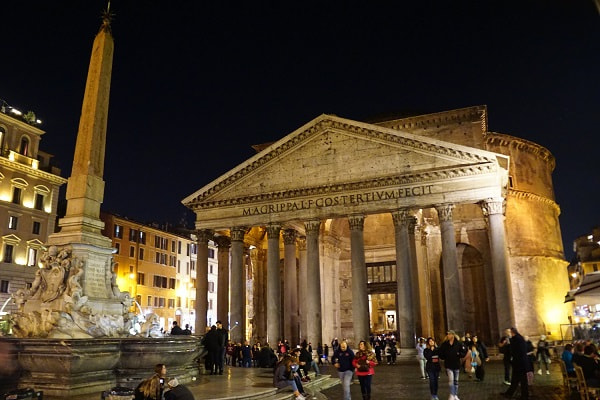 This is another one of those places that a guide or audio tour is very helpful to fully appreciate it. Rick Steve’s has a good free one you can download as part of his free Rick Steve’s Audio Europe app. This attraction is totally free and amazingly well preserved. Regardless of when you go there will always be a crowd and some security. We went once in the day and once at night and enjoyed both experiences. There is a different feel between the two.

The Pantheon, build almost 2000 years ago, is one of the best preserved since it became a church. It was originally built as a temple for all the gods. It is the one structure that was rarely damaged because of how much respect everyone had for it. It has been renovated innumerable times over the years but has the original structure, columns and floor. Today it is a church, tourist attraction, and resting place for a couple kings of Italy and Raphael the artist. I love standing there while they announce “silence” in a dozen different languages. 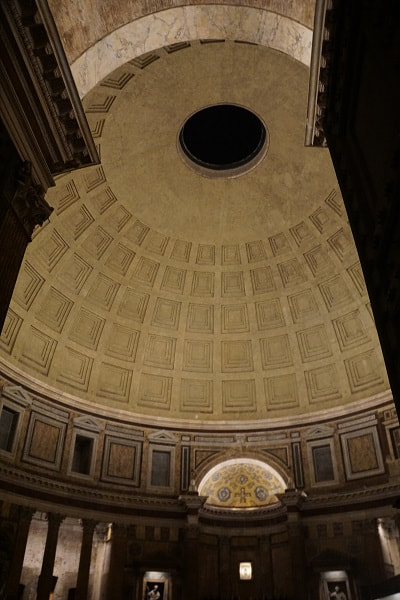 The Pantheon which has the largest unsupported and non-reinforced solid concert dome in the world. The dome is made of very thick concrete at the bottom that gets thinner and lighter as it goes up. This dome is open in the middle to the sky and designed astrologically so the glow of the sun would move around the inside like a sun dial and on the solstice would be perfectly aligned. The building is perfectly proportioned to hold a perfect sphere within it.

The columns are each one solid piece of marble and were brought from Egypt on boats. Looking at the Pantheon, the Colosseum, the Forums, and other ruins, it is easy to see why the people considered the Cesars to be gods. These must have been extraordinary in that time. Even today, their size is bigger than I ever imagined and blows me away. Most everything in that time was built by slave labor form conquered lands (Europe, Egypt, and some of the Middle East). I’m sure the work was brutal, but I can’t help but wonder if any of them felt any bit of awe to be part of building something so extraordinary. 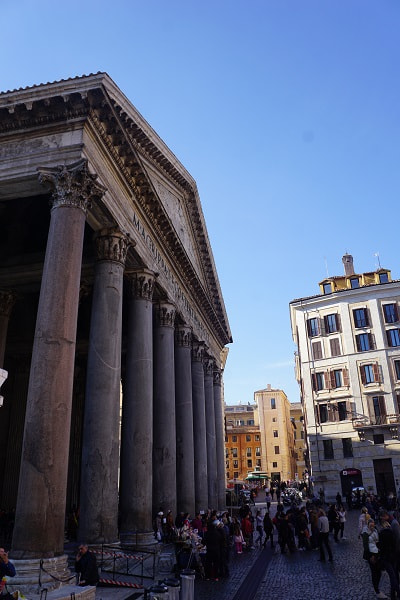 Tip: If you want a sweet snack San Crispino’s sells gelato is just around the corner at Piazza della Maddalena, 3. You will pay about 2 euro for a small cup (2 flavors), but the quality is excellent and the price is not horrible for the location. My favorite flavor is ginger, but feel free to ask for a sample before you make a selection.